The science of wellbeing in the workplace

Our leadership, lunch and learn event last month at The Savoy brought together thought-leaders in people development and HR to explore the latest developments in leadership. With talks from CHX, Little Bird and Professional Development People, we had some interesting case studies and discussions around diversity and inclusion, wellbeing & performance, unconscious bias and women in leadership.

One of the topics we explored at our event was Wellbeing in the Workplace. Something that Damien Stork, founder of CHX discussed at great length. CHX’s business focuses on enabling people to be at their best in all environments, exploring how wellbeing impacts leadership and performance but is often undervalued by executives as a “nice to have”.

What’s fascinating is the relationship between mental health and mood. Damien explored the concept of ‘headroom’ - the capacity to deal with stress. The higher your baseline level of stress, the less headroom you have, and the less capacity you have to deal with further stress. 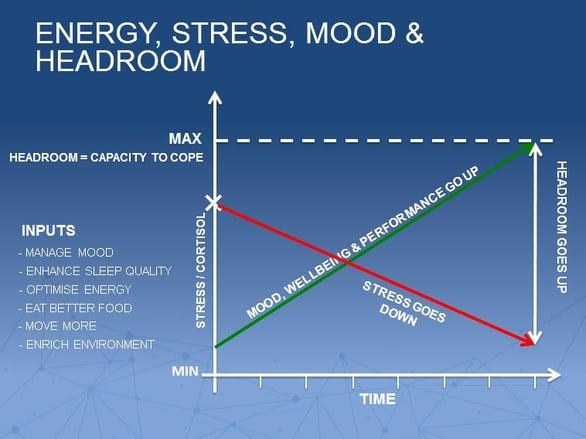 If baseline stress levels are high, individuals have very little headroom; the smallest stressor could take this person very close to the limit or over it, resulting in mood and behaviours that have a knock-on detrimental effect on individual and team performance.  When you go over that red line – a common occurrence in the corporate world – you generally suppress mood and emotions because social norms require it. This, in turn, produces greater levels of stress and at the same time inhibits the executive brain from being able to carry out business-critical functions. This is where people don’t just underperform, it’s where they make catastrophic mistakes and/or alienate their colleagues or clients.

Our baseline stress level is controlled biologically and is influenced in the short term by environmental triggers.  The problem is that our lifestyles in the modern world have led to our biology being totally out of sync with our environments.  Our baseline stress levels are naturally much higher and unhealthy stress response is very quickly triggered – it no longer takes wild animals to make us afraid or angry!  In our convenient, cockpit-lives we need to focus hard to keep a baseline level that is either healthy or conducive to high performance.

CHX’s programmes at the foundational stage, are about increasing your headroom through what they call bottom-up processes.  This is understanding your brain and focusing on how you create the right biological environment for it to perform at its best.  This is where the initial focus on nutrition, sleep, movement, and environments plays a key part. Control those and you control your baseline stress.

Dopamine, the reward of survival behaviours!

Damien explored how dopamine (a key neurotransmitter that is linked directly with mood) makes us want more of everything.  A study in the 1950s first identified our ‘reward’ circuitry (mesolimbic pathway) and the theory evolved very quickly to show that mammals of all types are hard-wired to repeat actions that elicit a dopamine response. It is ultimately how we became addicted to things. 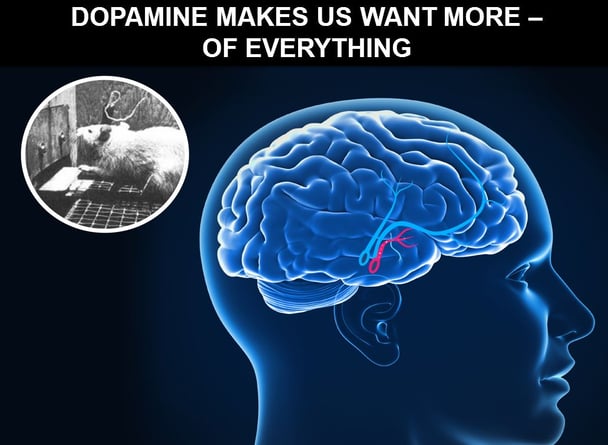 Dopamine evolved to keep us alive. It made us feel good if we hunted, procreated or ate nutrient-dense foods (which we now coat in sugar and salt for an extra hit!).  It rewarded us for anything that promoted survival. The problem is that in the modern World we don’t really need the survival drive in the same way and the system has been hijacked by convenience foods, alcohol, drugs, caffeine and similar high-reward substances that act like trojan horses – promising one thing and delivering quite another.

Dopamine has left us at the mercy of gyms, online retailers and food & drink companies!

Control the lizard. Feed the mammal. Unleash the executive. 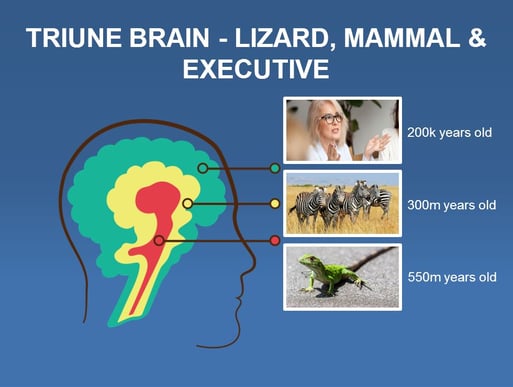 The talk went onto discuss the three different evolved areas of the human brain (Triune brain theory) and these are what CHX refer to as Lizard, Mammal and Executive. The theory proposes that both our very distant lizard/reptile ancestry and our less distant but still very ancient mammal ancestry can still be found in relatively intact regions, structures and pathways in the brain. Alongside what we think of as the ‘human’ brain, also known as the neocortex, we have a mammalian brain and a lizard brain, each of which, to a certain extent exhibits behaviours and responses consistent with the animals in question. Ultimately, alongside the executive and perhaps computer-like brain that we all think we have, very much alive and well inside our head is a zebra and a lizard! These three brains function as one most of the time, but when they don’t, because either instinct or emotion (or both) take over, we can make serious mistakes.

As an example of how the three brains differ, our lizard brain is instinctive; it’s focused on survival and threat, therefore it prioritises speed over accuracy and is highly risk averse.  This part of our brain is not emotional, it responds to danger and regulates all the survival processes. In the working environment, we have to be careful because survival dominates all other needs.  If we allow it, the lizard brain can take over, and this is only valuable if a deadline is looming or the task just needs to be done.  Mood originates from this part of the brain and lizards are not social, so to create the right corporate mood, we need to manage our lizard carefully!

Unlike the lizard brain, the mammal brain is complex. The mammal brain is led by a range of emotional needs. It tends to have a herd instinct, which sounds like a relatively straightforward idea, but when you consider the strong need for inclusion and need to conform, this results in a safety-in-numbers approach. The potential issue with this is the element of exclusion, which usually in nature leads to death.

Mammal brains have needs, such as social acceptance, equitable treatment, elimination of ambiguity, a sense of freedom from constraint.

In the workplace when we feel like we’re being excluded, feel undervalued, sense we’re being micro-managed, feel there’s ambiguity or risk, or we perceive some kind of inequity within our treatment we experience very negative emotions such as anxiety, anger and depression… which obviously doesn’t lead to a very productive environment.

Businesses spend too much time focused on how to manage and suppress emotions when they are a critical performance factor.  Creating the right environment for emotional authenticity, allowing everyone to meet their mammal needs, is key in unlocking engagement and productivity.

This is the most familiar part of our brain, we call this the executive or conscious/neo-cortex. This is the brain we expect to be using in the workplace and spend a fortune on trying to develop.

Our executive brain processes information, balances priorities, evaluate outcomes, develops values and theories, sets goals, and plans. It is self-controlling, meaning it regulates emotions/moods, sets goals, solve problems, is creative and moral. Given all of this greatness, we would expect this stellar part of the brain to be the part to get on with heavy lifting and tends to be why we head here when looking to spend L&D budget.

The problem is that our instinctive and emotional drives are constantly lobbying the executive brain, and despite what we convince ourselves of, our executive brain often loses out.  It only takes a small imbalance in our physiology – a skipped meal or a bad night’s sleep – and our executive brain will have little chance of being in control.

Armed with this knowledge of how the brain (and our own actions) are hard-wired to generate and cope with the conditions for stress and reduced headroom, CHX in partnership with Optamor offers training for leaders on how to encourage the behaviours required for positive wellbeing, creating the right culture and insight into the conditions necessary to support and encourage wellbeing.

Got something to add?

Leave your comments below...